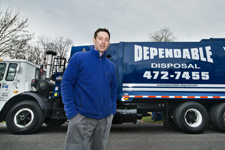 Company History:
In 1982, David C. Morgan purchased a small residential trash route of 100 customers. As a full-time mechanic during the week, he collected his trash route on Saturdays. In 1986, after busily working two jobs for four years, Dave decided to quit his full-time job and focus on growing his trash business.

With about 450 customers, Dave began operating three days a week in the towns of Van Buren, Lysander and Elbridge. He continued to grow a successful business until December of 2002, when he suffered several debilitating strokes that left him unable to operate his business. By this time, D.C. Morgan Trash Service had approximately 2,600 residential customers and had expanded to the towns of Marcellus and Onondaga. The company also increased their lines of business to include roll-off container service and commercial front load service.

In the year prior to Dave’s decline, his son, Steven Morgan, formed a startup residential company, Dependable Disposal, LLC. By 2002, Dependable had gained 550 residential stops, purchasing all of D.C. Morgan Trash Service’s residential customers. Steven then formed a new company, Morgan Rubbish Removal Inc., for the roll-off and commercial lines of business. 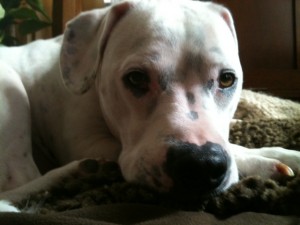 Otis Lee is our four-year-old American Staffordshire Terrier, our K9 spokesperson, if you will! We adopted Otis from the Syracuse SPCA and he is a loving, enjoyable part of the office. Dependable Disposal, Morgan Rubbish Removal, and Steve Morgan (Otis Lee’s owner) all feel a strong commitment to the SPCA and the vital services they provide for the community.